The Denver area, part of the Territory of Kansas, was sparsely settled until the late 1850s. Occasional parties of prospectors came looking for gold, then moved on.

In July 1858, Green Russell and Sam Bates found a small placer deposit near the mouth of Little Dry Creek (in the present-day suburb of Englewood) that yielded about 20 troy ounces (620 g) of gold, the first significant gold discovery in the Rocky Mountain region.

News spread rapidly and by autumn, hundreds of men were working along the South Platte River. By spring 1859, tens of thousands of gold seekers arrived and the Pike's Peak Gold Rush was under way.

In the following two years, about 100,000 gold seekers flocked to the region.

In the summer of 1858 a group from Lawrence, Kansas, arrived and established Montana City on the banks of the South Platte River (modern-day Grant-Frontier Park).

This was the first settlement in what would become the Denver Metropolitan Area.

The site faded quickly due to poor findings by miners and most of the settlers and some structures moved north to the confluence of the South Platte River and Cherry Creek and formed a new settlement named St. Charles. 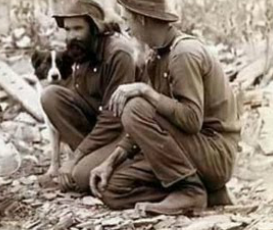 The location was accessible to existing trails and had previously been the site of seasonal encampments of the Cheyenne and Arapaho.

In October 1858, five weeks after the founding of St. Charles, the town of Auraria was founded by William Greeneberry Russell and party of fellow settlers from Georgia on the south side of Cherry Creek. The town, named for the gold mining settlement of Auraria, Georgia, was formed in response to the high cost of land in St. Charles and gave away lots to anyone willing to build and live there.

A post office was opened in Auraria in January 1859 serving the 50 cabins that had already been constructed.

A short time later a third town, called Highland was founded on the west side of the South Platte River.

Surrounded by steep bluffs and separated from the other two settlements by the river, it was slow to develop.