Brusaw, an electrical engineer, says the hexagon-shaped panels can withstand the wear and tear that comes from inclement weather and vehicles, big and small, to generate electricity. 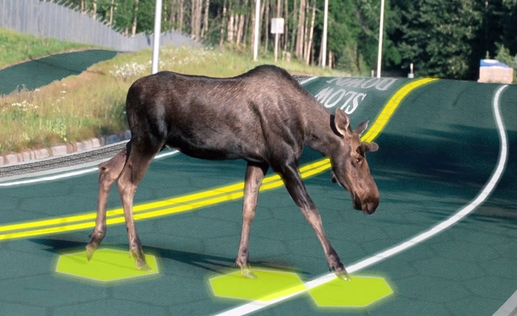 "We need to rebuild our infrastructure," said Brusaw, the head of Solar Roadways, based in Sandpoint, Idaho, about 90 miles northeast of Spokane, Washington. His idea contains "something for everyone to like."

While the idea may sound outlandish to some, it has already garnered $850,000 in seed money from the federal government, raised more than $2 million on a crowd-funding website and received celebrity praise.

The Solar Energy Industries Association, a trade group based in Washington, D.C., described companies like Solar Roadways as "niche markets" in the booming alternative energy industry.

"They represent the type of creative innovation that addresses design and energy, while showcasing the diversity of solar applications," said Tom Kimbis, a vice president of the association.

Brusaw said that in addition to producing energy, the solar panels can melt away snow and ice, and display warning messages or traffic lines with LED lights.

There are skeptics, who wonder about the durability of the panels, which are covered by knobby, tempered glass, and how they would perform in severe weather or when covered with dirt.

"It seems like something reasonable and something that is going to be very expensive," said Lamar Evans of the National Renewable Energy Association in Hattiesburg, Mississippi.

Another problem would be how to store the electricity that could be generated, Evans said.

The Brusaws have produced no estimates of how much the solar panels would cost, so the financial realities of their vision remain an unknown.

To demonstrate the concept, the company has created a small parking lot at its headquarters, using 108 solar panels. Vehicles have been driven onto the space, without damaging the panels, he said.

"We'll start off small with driveways and walkways," he said.

She remembered that Scott had long talked about the concept of electric roads.

The U.S. Federal Highway Administration gave the Brusaws $850,000 to develop Solar Roadways over the past few years, and build the prototype parking lot.

Donations trickled in, but two factors helped spread the company's vision: a viral YouTube video and celebrity mentions in social media. The video has more than 14 million views.

The floodgates opened when actor George Takei of "Star Trek" fame and the TV show "MythBusters" mentioned the company. They received donations from more than 45,000 people in 50 countries.

The money will enable the company to hire staff and begin production of more panels, Brusaw said. "Once we've perfected everything, our ultimate goal will be highways," he said.