In November 1858, General William Larimer, a land speculator from eastern Kansas, placed logs to stake a square-mile claim on the site of the St. Charles claim, across the creek from the existing mining settlement of Auraria. 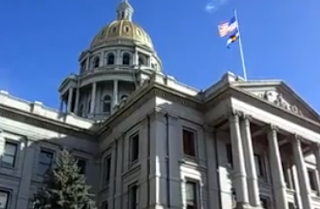 The majority of the settlers in St. Charles had returned to Kansas for the winter and left only a small number of people behind to guard their claim. Larimer and his followers gave the representatives whiskey, promises, and threats and the St. Charles claim was surrendered.

The name of the site was changed to "Denver City" after Kansas Territorial Governor James W. Denver, in an attempt to ensure that the city would become the county seat of then Arapaho County, Kansas.

Ironically, when Larimer named the city after Denver to curry favor with him, Denver had already resigned as governor and no longer had say in naming the capitol.

Denver at first was a mining settlement, where gold prospectors panned gold from the sands of nearby Cherry Creek and the South Platte River.

Larimer, along with associates in the Denver City Land Company, laid out the roads parallel to the creek and sold parcels in the town to merchants and miners, with the intention of creating a major city that would cater to new immigrants.

In the early years, land parcels were often traded for grubstakes or gambled away by miners in Auraria.

But the prospectors discovered that the gold deposits in these streams were discouragingly poor and quickly exhausted.

When rich gold deposits where discovered in the mountains west of Denver in early 1859 it appeared that Denver City might become a ghost town as prospectors left for more lucrative claims.

But once the gold rush began there was a great need for materials that couldn't be produced locally which assured Denver's future as a supply hub for the new mines.

Before the gold rush, trading was sparse in the Denver area.

Early expeditions into the area, such as the Pike and Long expeditions, had returned east referring to the plains as the "Great American Desert" which deterred immigration.

Despite this, frontier posts and forts existed and traded with the natives and frontiersmen.

However the closest major trading routes, the Oregon and Santa Fe Trails, didn't come with in a hundred miles of the Denver area.

Until a permanent trading route was established the locals had to make due with what little extra new immigrants brought with them.

Auraria and Denver began to compete for businesses that could cater to the new immigrants and for domination of the area. Auraria began to take an early lead with the first saloon, smithery, and carpentry shop.

But in May 1859, Denver City donated 53 lots to the Leavenworth and Pike’s Peak Express in order to secure the region’s first overland wagon route.

Offering daily service for “passengers, mail, freight, and gold,” the Express reached Denver on a trail that trimmed westward travel time to as few as six days.

With supplies being delivered to the Denver side of Cherry Creek, businesses began to move there as well.

By June Auraria had 250 buildings compared to Denver's 150 buildings, and both cities were growing quickly. With this growth came a need for a wider government.